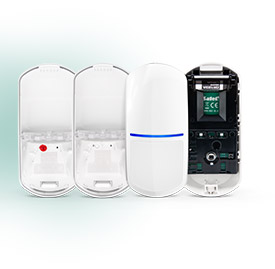 MPD-310 and MPD-310 Pet are compatible with the PERFECTA control panels (WRL models, provided with a radio module), MICRA alarm module as well as VERSA-MCU and MTX-300 controllers. The detectors have a coverage area of up to 18x16.5 m. MPD-310 has a tilting mirror which enables control of the creep zone, while MPD-310 Pet is immune to the movement of pets weighing up to 20 kg. Both detectors are installed in new slim enclosures, already known from the SLIM LINE family detectors, as well as the APD-200 and APMD-250 wireless detectors.

The MRU-300 repeater receives radio transmissions from wireless devices and retransmits them. Thus, it allows the appropriate level of signal to be obtained between the transmitters (MICRA family detectors and MPT-350 keyfobs) and the receiver (PERFECTA control panel in WRL version, MICRA module, VERSA-MCU or MTX-300 controller). The repeater can be used, for example, where elements of the wireless installation are spaced too far apart for proper communication or where some obstacles between them are limiting the effectiveness of radio communication. 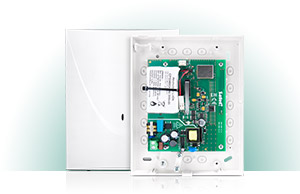 The next group of products are the RK series universal radio controllers. There are four models differing in the number of supported relay outputs (channels): 1, 2 or 4, i.e. RK-1K, RK-2K, RK-4K and RK-4K SMA. The first three of them have built-in antennas, while the last one comes with an SMA connector for connecting an external antenna.

They are intended to control devices (like barriers, gates, roller shutters, etc.) connected to the controller relay outputs by using keyfobs. Additionally, they have inputs and outputs designed to work with the control panel, therefore they can be used, for example, for remote arming and disarming of the alarm system. The controllers support the following models of keyfobs: MPT-350, MPT-300, T-4, T-2, T-1, P-4 and P-2.
Each module is sold as a set with two keyfobs, respectively:

For configuring the work of controller relay outputs and managing the keyfobs, you should use the RK Soft program.

The OPAL family and AOD-210 outdoor motion detectors, as well as AGATE and AOCD-260 curtain detectors can now be installed using the BRACKET E modular distance holders. This way of mounting allows installation of the detector away from the wall surface by as much as ten centimeters or more to avoid the detector coverage being limited e.g. by a drain-pipe protruding from the wall, cornice, lamp, etc. Using the BRACKET E bracket, you can also install the detector e.g. on the soffit under the eaves of the roof or under the balcony.

Individual elements of the BRACKET E holder (available in white and gray) are available separately, so you can configure the holder freely to suit the requirements of your location:

GPRS for INTEGRA and INTEGRA Plus

New version of the mobile application for INTEGRA control panels

New product launches at the end of 2015

What are SATEL's new proposals for autumn 2015?

The September novelties from Satel